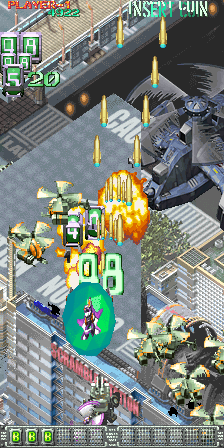 In a near-apocalyptic world ravaged by global warming, a global arms dealer company, EVAC Industry, is discovered to be stoking tension and triggering wars in order to boost its weapon sales. In a last act of desperation, the United Nations forms a clandestine squad of four ships to sneak into EVAC's territory to take out their private army and end the war.

Ketsui is a manic (bullet hell) shooter in the classic Cave style with a very heavy focus on scoring. The player has a choice between two ships; the slow-moving Tiger Schwert has a wide shot, while the fast-moving Panzer Jäger has a focused shot. Both ships feature a lock-on mode; by holding down the shot button, the player shoots a tightly focused laser and the player's support ships lock onto the nearest enemy, allowing the player to strafe while continuing to shoot.

Scoring is based on a complex combo system. Enemies drop chips numbered 1 to 5 when killed, and the value of the chip is higher the closer the player is to the enemy. This encourages high-risk play in order to improve score. Collecting a high-value chip starts a timed combo; while the timer is counting down, the value of any chip dropped by an enemy killed with the player's laser is boosted to the value of the chip that started the combo. Of course, chips aren't scored until the end of the level, and the player loses any chips collected on death. This encourages the player to play riskily to start high-value combos while still trying to avoid dying before the end of a level in order to hold on to everything they've collected.